Start of the Women's League 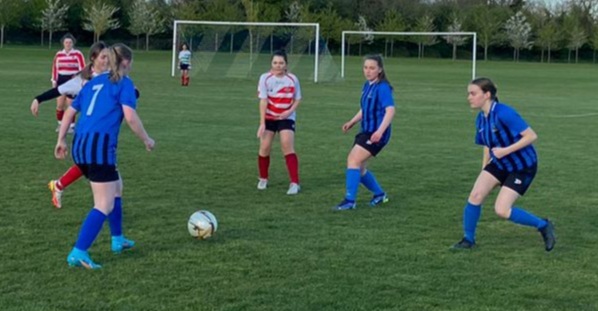 Liffeybank FC Women’s team hosted Enniskerry FC Monday evening 24th April in St. Catherine’s Park. In ideal conditions the hosts started brightly with early chances for Fáinche Grimes and Amelia Carroll. Liffeybank’s midfield trio of Sarah Scully, Jane Finnegan and Marie O’Neill toiled effortlessly in the centre of the field which subsequently set Amelia Carroll free down the right in the 16th minute where she found a through ball for Fainche to power home the 1st goal with a rasping left foot strike. The Vikings defensive team of Georgia May Barry, Roisin Nolan and Niamh McCarthy alongside keeper Orla Counsel kept Enniskerrys attack under wraps excellently also which after good work from them Amy Tully broke free to score a wonderful solo effort. Post halftime again Liffeybank controlled the game doing the simple things well. 13 minutes into the 2nd half on the 58th minute following good hold up play from Ali Lowry, Ruth O’Hurley making her league debut brilliantly played Sarah Scully in on the right of the box for Sarah to take a goal her performance deserved. From there Liffeybank stayed in control for the remainder of the game creating some more chances and defending stoutly.